What is Les Mills RPM, and how is it different from other indoor cycling classes? This short article aims to answer these questions and dispel some common misconceptions about Les Mills RPM.

The gym where I teach is just about to launch Les Mills RPM and I, along with two other great instructors, can’t wait to start teaching it. I know there is some skepticism, even anxiety, from the regular spinners in the club. In part this is because they love their existing classes and are worried RPM is going to replace them (although the RPM classes are in addition to all the existing spin on the timetable) but in part it’s because there seem to be lots of myths around about RPM (and Les Mills classes in general), a couple of which I am going to try to dispel now.

Firstly, let me say that I have been teaching freestyle spin (an indoor cycling class where I basically get full control on what music I choose, what resistance to use at what point in the class, and the general direction I want the workout to go in; basically, it’s all me) for the best part of a decade, and I love it. I love choosing my own music and then listening to it and working out what sort of cadence (speed) and resistance we should be doing to match the RPM (revolutions per minute) with the highs and lows of the music. Love it.

This process, however, takes time, and for me, it takes a lot of it. For a 45 minute class, it probably takes me 3 hours to fully prep. This is fine when teaching classes is your full-time job, or if you’re not teaching very many classes a week.

Alas, I do have (a different) full-time job and I teach several times a week.

This is what I like about teaching Les Mills RPM. I don’t have to spend hours on end working on these things. I just have to learn the choreography and then use my energy to work out how to deliver it in my own style.

Ummmm, no! HOW BORING WOULD THAT BE! So the way that Les Mills works is that every 12 weeks new choreography and music is ‘launched’, usually with a bit of an event (there’s a lot of fancy dress at our gym for these launches, see the pic of me at the January 2015 launch below). These ‘releases’ have a number; for example, the last launch of Les Mills RPM was ‘RPM 66’. But that doesn’t mean that you then do the exact same class for the next 12 weeks. 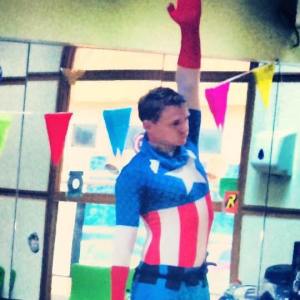 Typically you do the new stuff for a few weeks and then add some tracks from previous releases, or use a whole other release for the next few classes. This means that your participants (and you) don’t get so bored with the workout that you lose motivation! I tend to stick to the new release for 4 weeks and then start to mix.

There’s also science behind this too: your body will stop adapting to a new training stimulus after 4-6 weeks, so it’s really important that you change the stimulus (by changing the release or some tracks of a release) to continue to have the best training effect.

So, this myth comes directly from the freestyle vs pre-choreographed debate, which I don’t want to get into here in detail so this will be brief.

It’s all down to the quality of the instructor.

Les Mills classes, and the individual tracks within them are highly choreographed and instructors learn that choreography, so, it’s possible that someone with no imagination, style or personality (i.e. a robot) could deliver the basic moves. However, as Les Mills takes care of all the basics for us, we as instructors have time to put our energy into using artistic license to do what you want with the class. Let me give you an analogy I like to use.

Have you ever seen Romeo and Juliet on stage? Have you seen Baz Luhrmann’s film version of it – you know, the one with Leonardo DiCaprio? These are the same lines and story as any other Romeo and Juliet performance. But they are COMPLETELY different, due to different interpretations of the same thing. It’s the same with Les Mills classes (not just RPM). Some instructors’ interpretations of the classes need a lot of work, but some of them are a thing of beauty. In fact, one of the reasons why I became an instructor was being blown away by an RPM class at a big event in Liverpool in 2014.

So what’s the difference between freestyle spin and Les Mills RPM?

I have found that there are three main differences.

Hopefully you can tell from this that I am a big fan of free-style and Les Mills indoor cycling! Neither is right or wrong, some people love one and not the other, some people like neither, and lots of people love both. We all like to get different things out of our classes and having a varied timetable and talented instructors (both freestyle and pre-choreographed) should make the majority of us happy.

My personal advice if you’re either a freestyle spinner or a hard core RPM’er…Try the other one out. Dip your toe in the water. You might surprise yourself with how much you enjoy doing something different. And if it’s not for you, that’s ok too, but at least you will know from experience!